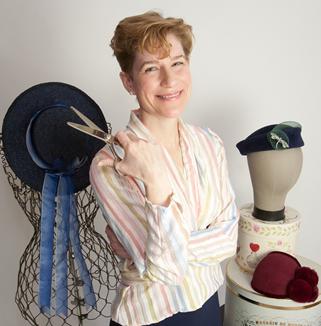 Professor Pski with some of her own creations. The navy sailor is straw trimmed with silk ribbons, the navy pillbox is felt trimmed with horsehair and a jeweled dragonfly, and the burgundy half-hat is trimmed with velvet and pom-poms.

Professor Pski's blouse is from a 1930s pattern from Eva Dress.

One Dress for Every Day

In 1918, Mary Brooks Picken told the story of a thrifty businesswoman who wore the same dress to work every day for two years with only a change of collars and cuffs.

Professor Pski decided to try it herself by wearing the same dress to work every day for a month.

Would anyone notice? Only one student said she had.

“I never enjoyed my clothes more, and I shall never

own more than four dresses at a time for as long as I live.”

So said the thrifty business woman in 1918.