Below are two recent courses taught by Professor Pski.

She also teaches on the Era of the U.S. Civil War and Reconstruction,

on Crime, Heredity, and Insanity in American History,

and on Law and Religion in U.S. History, and A Nation of Slobs.

Professor Pski was inspired to create this University Seminar after a story about her edition of the memoirs of Malvina Shanklin Harlan appeared on the front page of the New York Times. What kinds of history catch the public eye? What is gained or lost when a scholar writes for a popular audience? One class spent time looking at how scholars, museums, and films present Abraham Lincoln as a president, husband, and vampire hunter. Notre Dame's Institute for Studies in the Liberal Arts funded a class visit to the Abraham Lincoln Presidential Library and Museum where students had a chance to talk to  James M. Cornelius, Curator of the Lincoln Collection.

Professor Pski created this upper-level seminar to introduce students to the history of dress, fashion, and the distribution of fashion in Europe and the United States. It starts in the late 19th century when the department store was invented and reformers of women's dress were railing against the tight corset and the excessive frippery found on women's clothing. Students learn about about the rise of ready-to-wear clothing, how Europeans and Americans dressed for two world wars, how they coped with periods of depression and prosperity, and how they argued over the meaning of clothing and appearance to men and women from the bobbed hair of the 1920s to the denim overalls of the American Civil Rights Movement in the 1960s.

This is the Biennial Dress, an attempt in 1916 to design a dress that would flatter every woman and never go out of style.

It didn't quite work, did it? 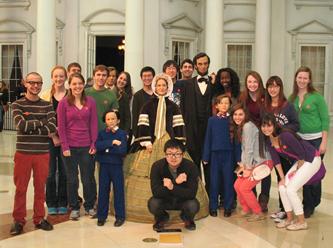